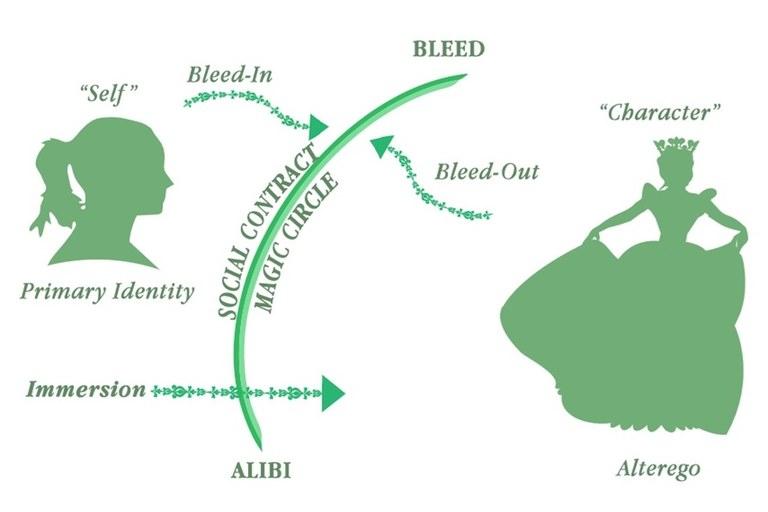 First in a series by Erik Mitchell on Role-Playing Games and the concept of "Bleed".

Read Part 2 with this link: https://rpgresearch.com/blog/rpg-research-community-blog-1/post/what-is-role-playing-game-bleed-part-2-12

Part 2 in his ongoing series about role-playing games and the phenomenon known as "Bleed".

Available to Patreon supporters 4+ weeks before the general public ( www.patreon.com/rpgresearch)

Today, I want to discuss briefly something that crossed my mind while reading through player opinions on bleed: “For good role play, is bleed a requirement?” This blog posting is a lot more free form than my last as I had an idea spring up and ran with it. I understand that this posting is almost entirely opinion based and will require more diligent researching. I fully intend to present a followup post outlining more in-depth exploration.

I was spurred to this topic by a quote from user EmmettO (2013):

“Some players can play roles without feeling what the characters feel but they don't always do it consistently.”

While I do not necessarily agree with the last part of the statement, to me, EmmettO implies the following: an emotional immersion into a player’s character is required for an individual to roleplay well. By this extension, it would imply that a good player should always put themselves in their character’s shoes. Although this quote does not necessarily represent the entire player base of role-playing games (RPGs), it does pose a couple interesting questions:

Is role-play a better experience, either for a group or individuals, when it’s subjective vs objective?

In regards to subjective vs objective role-play, does one style lead to higher occurrences of bleed over the other?

I did not have a word for what I wanted to describe, so I am proposing this theory.

Purely subjective play would be the idea of taking on your character’s emotional state, thoughts, and feelings while playing. This would lead to a decision pattern based on the stimulus of what is experienced by the character.

Purely objective play would be the idea of taking information and making a decision based on factors presented in the game play. The decision pattern would be based on events, a compiling of data from these events, and an action based on information about the character. This may include alignment, class, statistics, previous decisions, personality archetype, etc.

There is a difference in the knowledge that a player has versus their character, as well. For example, a player may be able to see around a corner, as another player’s character is around the corner and can see the area, however, the player’s character would not have access to the knowledge of what lies ahead. This is an example of metagaming and may affect the limits of these types of role play as well. Metagaming is, basically, anything that happens outside the game world that directly relates to it. i.e.: table talk, players hearing information that their characters would not otherwise have any access to, GMs talking freely about upcoming events, reading ahead in a scenario rulebook, etc. Because of meta gaming, it may not be possible to fully embody one or the other theories mentioned.

Now, how might these different play styles affect players in respect to bleed? If you’d like a quick refresher on bleed, please make sure to check out my previous blog post here.

Objective play would still be prone to bleed, however, the distinction between player and character would be greatly increased in this playstyle. As the reactions to stimuli are the driving decision-making force, the player is basically another step removed from their character’s emotional state. This may help mitigate any strong reactions from bleeding out.

The type of bleed experience in both of these playstyle types would also likely be different. A subjective player may be affected by a character’s death on a personal level, feeling as though they were at fault or having regrets due to their choices. An objective player may feel similar feelings after a character’s death, however, the emotions may stem from a frustration that their play, although true to character, was not being rewarded but punished. They may feel frustrated that making an incharacter (IC) decision lead to a negative result. The frustration may also come from feeling pigeonholed into being a character that would make poor decisions.

These types of decision making would not be, of course, mutually exclusive. Role players would hardly choose to be fully, emotionally invested in a character, or solely make decisions based on facts. More than likely, players will experience some combination of these two decision types. As such, It would be possible for players to move between different modes of play. For a mainly subjective player, an objective playstyle might emerge near the beginning of the campaign due to lack of intimate character knowledge, evolving into subjective play as the character develops. For a mainly objective player, a more subjective approach might emerge near the beginning in order to explore and establish a character’s baseline, evolving into objective play as a character is fleshed out. A player may change styles based on outside factors, such as bleed in. If a subjective player is sick or distracted, they may take a more objective approach. An objective player may do the opposite. Outside factors may not cause any change or even amplify the original decision making process. Moments of high immersion or flow state may or may not also change the style of play.

Now, back to the original question asked: For good role play, is bleed a requirement? I believe the answer is a solid maybe. While I do not think that bleed itself is necessary to be a good roleplayer, I do believe that opening up to the opportunity for bleed is a requirement. Both subjective and objective players would inevitably experience bleed, although many forum posts stated that players targeted a “zero bleed” experience. Some even stated that to experience bleed was a fault and lessened the roleplaying experience. I believe that trying to repress or distance oneself from bleed only changes the type and source of emotions players feel, it does not stop their occurrence. While it is definitely possible to minimize the effects, or promote positive effects, bleed is likely unavoidable and it is not possible or necessary to completely eradicate it. Bleed is best prepared for and dealt with accordingly, regardless of whether it is intentional or accidental.

The ideas I have presented here, subjective vs objective play, are probably not new and probably have fancier names as well. Perspective taking was suggested as a possible mode of continued learning on this subject. I purposefully allowed myself to brainstorm, musing aloud here, without trying to find more information beforehand, as this will allow me to see how my opinions compare and contrast to a subsequent literature review. As my research develops, I will be seeking out resources to further expand on this phenomena. Please feel free to comment and discuss the theories presented here.

Until the next time!